We’re glad you asked!  Weekend Philler is a weekly video clip show that runs on the weekend onPHL17 (Currently Saturday nights at 11:00 pm and Sunday nights at 5:00 pm).  The videos are lighthearted short pieces about interesting people, places and things all over Philly, NJ and DE.   We like to say we’re putting the YOU, back in UHF…  (even though we are fully aware people under 30 have no idea what that means.)  Basically it hearkens back to a time in local TV when UHF channels took themselves a little less seriously and had the freedom to make really interesting content.

Weekend Philler is produced by PHL17’s award-winning Creative Services Department and hosted by Creative Services all-star Tony Romeo.  The team of producers that make Weekend Philler are very much like the the Breakfast Club.  They are all very different, but still a little the same– and of course forced to come in on Saturday by the Principal– or something like that.  The end result is a wide variety of local videos with something for everyone.  Since the show began in 2016 Weekend Philler has received numerous industry award for content, had a craft beer named after the show and made hundreds of new best friends in the stories we cover and thousands more friends that watch every weekend.

But the real star of the show is YOU.  We give you the mic and let you tell your extraordinary stories.   We put a lot of care into our segments because we love this area, we love putting great people and great stories on TV and  we are always looking for new ideas. If you have an idea for the show, reach out to us! You can reach us on Facebook, Instagram and Twitter. 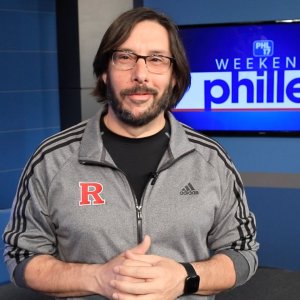 Weekend Philler is hosted by PHL17’s Creative Services Digital Producer, Tony Romeo. If he seems oddly familiar, you may recognize his “mug” from promos, most notably, retro 70s character “Peter Cheeseman” in PHL’s promos. You’ve probably even heard his voice in a commercial or two. When Tony is not “philling your weekend,” he manages the web department where he writes, shoots and edits stories, galleries and videos that have generated millions of views for PHL17. That clever tweet or funny Facebook post that made you laugh? Chances are, it came from Tony, as he also overseas the station’s social media efforts.

Weekend Philler is executive produced by PHL17’s Creative Services Director, Travis Brower. Travis brings the whole thing together but also gets his hands dirty making segments and even hosts a little show within a show called “Weekend Gameshow” from time to time. He’s done everything from Promo producer to Cage Fight director and has been with PHL17 since 2002. Travis is a Collegeville native currently occupying land in Eagleville PA. He graduated from Kutztown University with a Bachelor’s Degree in Telecommunications. His favorite band is Manowar, his favorite movie is Big Trouble In Little China, and his favorite hobby is Dungeons and Dragons.

John Clements serves as one of Weekend Philler’s producers. John likes to make spots about wrestling, gaming, and comic culture, as well as producing music-related segments that allow him to bring his love for guitar to the screen. He has been with the station since 2009, starting as an intern before working his way up to his current position. In his spare time, John likes to read, play guitar, and play video games.

William Lehan serves as one of Weekend Philler’s producers, and also creates all of the beautiful graphics that you see on the show. William is PHL17’s lead graphic designer, and he brings those skills to the stage in all of the segments that he produces for the show. Not only does he create all of the awesome “opens” that you see in our segments, but he also infuses his individual pieces with awesome, complex graphics. When he’s not creating awesome graphics and producing segments, William lives with his wife in Philadelphia.

Morgan Dougherty is a Weekend Philler producer, and a graduate of Temple University with a degree in Media Studies and Production. Morgan enjoys creating Philler pieces that tell important stories, and make an impact on the community at hand. As a lifelong resident of Philadelphia, she loves discovering new people, places, and things in the area and telling their stories. When she isn’t making philler segments and ensuring they land safely on the web, Morgan likes to spend time with her family, friends, and pets, and eat good food!