Eight days before her high school graduation Brianna Wittman’s life changed forever when she was hit by another driver on I-295 in New Jersey. It’s now six years later, Brianna has a checklist of goals set for herself, all while inspiring others along the way.

“She had just gotten accepted at Evangel University. She was happy, she had a direction, and a week before her graduation she had this car accident.” Remembers Brianna’s mom, Chrystal Warrington. That was in June of 2012. Brianna was on the way to show her dad a painting she had just finished at school, when she was hit by another driver on I-295 in Mount Laurel.

From the severity of the accident and extensive damage done to her brain, Wittman’s doctors gave her less than a one percent chance of surviving her injuries. “She was in a coma for almost two months. She was on a respirator and she was on a feeding tube. Everything. She was unresponsive the whole time and got pneumonia twice.” The family was told to prepare and even if she would make it, doctors said she would be in a vegetative state.

Chrystal remembers being so overwhelmed. “I couldn’t believe it was happening. We pretty much lived at the hospital.” But eventually Brianna woke up and in October of 2012, four months after the accident, Brianna spoke her first words.

“Her first words were Mom I love you. I was so excited to hear her little voice. She just whispered it so softly.” The family credits an act of God and a whole lot of prayers as Brianna’s progress continued. In and out of rehabs would be the life of Brianna and her mom for the next 14 months, as she learned to walk and talk all over again.

The following June 2013, Brianna was finally able to put on her cap and gown and receive the first diploma from Moorestown High School’s Class of 2013. “The crowd was screaming, everyone was clapping and yelling. They were so happy to see her, it was just a beautiful day.”

On February 22, 2014, Brianna took her first steps without the help of her walker and in May 2016, nearly four years after the accident that nearly took her life, Brianna ran on her own.

Her story and determination has not only inspired others but has brought huge support to the family. Brianna now has a documentary about her life that’s titled Ask. Seek. Knock. The Story of Brianna Wittman. The documentary is named after Brianna’s favorite bible verse.

So I tell you:

Ask and it will be given to you;

Seek and you will find;

Since the accident, Brianna is still working on regaining all the abilities she once had. She will now be a part of a special career and community studies program at TCNJ this Fall. She will live on campus and after four years she’ll earn a certificate.

Chrystal says that Brianna will become the independent person she wants to be. “Thats her next big goal, she wants to be able to go to college and have the life she should have had almost six years ago.”

Six years ago, when a trip to show her dad a painting changed her life forever. By the way that painting? It was of God comforting Brianna, and it was the only thing in the car to come out of the wreck without a scratch on it. Since the accident the painting has traveled from hospitals and rehabs with Brianna and now resides above her bed as a symbol for everything she’s been through. 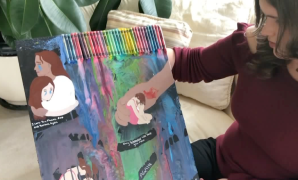 Brianna’s documentary is premiering Wednesday, April 25 at 7PM. It will be in Pfleeger Concert Hall on the campus of Rowan University in Glassboro, NJ. You can reserve your seats on Eventbrite.com/Ask-Seek-Knock.

Special Olympics “Flame of Hope” en route to the …

Dumpster or no Dumpster Dr. Lori