PHILADELPHIA, PA – Frank Brown is a transition player on the Philadelphia Wings and says ever since he was a young child he always owned a wooden lacrosse stick. Brown told PHL17 he is a member of the Seneca tribe and was given a traditional wooden stick by his uncle at the age of seven. Although Brown says only played in leagues with the stick for two years, Brown says the stick was always with him.

Brown says he still uses a wooden stick in a traditional “medicine game,” which is played a few times a year. 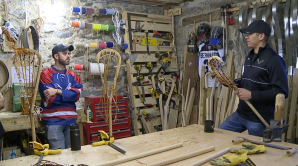 Tucked away in a small wood shop in Frankford, Justin Skaggs designs traditional wooden lacrosse sticks. Skaggs says he shares the sticks on Woodlacrossesticks.com and features other artists.

On Thursday, several Wings players had the opportunity to learn the Skaggs process and even string their own sticks!

During a very difficult time for many, a mother and daughter duo are sharing their book about spreading kindness. Carrie and Sophia Fox are the authors of Adventures in Kindness: 52 Awesome Kid Adventures for Building a Better World.

Wearing a mask has become a topic of fierce debate in the United States. Wearing masks may be around for a while so it's best to get comfortable to what it's like to interact with them.

Author and motivational speaker Lisa Bien joined us to talk about the importance of etiquette during COVID-19.

It can be pretty difficult to keep up a healthy lifestyle during the pandemic.

Paris Fit Studios is hosting a free fitness 4th of July virtual celebration to bring awareness to being healthy amid the pandemic.