Add it to the list, Philadelphia is having another victory parade, thanks to Villanova! The Wildcats will parade down the streets of Center City Philadelphia to celebrate their second NCAA National Championship win in three years. The Wildcat’s 2018 parade will be similar to the 2016 parade which drew thousands and ended at City Hall.

The Villanova National Championship Parade will take place on Thursday, April 5th, with a parade on Market Street at 11 a.m. and a rally at Dilworth Park. The City estimates the rally will begin around 11:45 a.m. and finish around 12:30 p.m.

Villanova University will be closed Thursday so students and staff can attend the parade.

Expect delays in Center City for this event as the City of Philadelphia and SEPTA have released their plans for the parade, listed below. 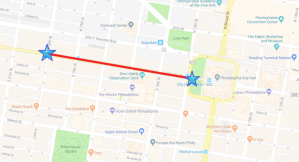 The following streets will be closed starting at 9:30AM until approximately 12:00PM on Thursday, April 5th:

The following streets will be closed starting at 10:00AM until approximately 1:00PM on Thursday, April 5th:

The following streets will be closed starting at 10:00AM until approximately 3:00PM on Thursday, April 5th:

All affected streets will be serviced and reopened as the march progresses.  Additional closures and lane restrictions may be necessary in the interest of public safety.  Motorists are advised to use caution and obey instructions of the Philadelphia Police Department.

Parking Restrictions
The following streets will be posted as “Temporary No Parking” zones from 6:00AM-4:00PM on Thursday, April 5th:

Please obey all “Temporary No Parking” signs.  Vehicles parked in these locations during posted hours will be relocated.

Public Transportation
Due to related street closures, SEPTA Bus Routes will be detoured from their normal routes through the area beginning at 9:00AM on Thursday, April 5th through approximately 3:00PM.  Detours will be posted and specific route changes will be made available on the System Status Page at www.septa.org.

Stairs and elevators to Dilworth Park from the underground concourse will be closed on Thursday, April 5th beginning at 9:00AM and reopened as conditions allow.

Public Safety Information
Leave no bags or items unattended.  In an emergency or to report a suspicious person, activity or item (a backpack, a package, a container), notify a police officer immediately or call 9-1-1.  Do not try to open, move, cover or touch a suspicious item.

The public should expect congestion in the area.  If you are attending the event, make a plan regarding driving, public transit, parking, and supervision of children.  It is recommended that attendees wear comfortable, weather-appropriate attire.

All locations referenced above and the surrounding area is designated as a “No-Drone Zone”.  Unmanned Aircraft Systems (UAS) and drones of any kind are not permitted.

For tips and general information about being prepared and ready at special events, read the Special Event Safety Guide before you attend.

Regional Rail is also an option for fans traveling to the parade, as SEPTA’s Paoli/Thorndale Line serves stations in Radnor, Villanova and Rosemont . Paoli/Thorndale Line trains operate approximately every 30 minutes. Schedule details are available at www.septa.org/schedules/rail/index.html.

SEPTA’s 15th Street MFL stations and the City Hall BSL station are scheduled to remain open during the parade; however, if conditions become overcrowded, those stations will be bypassed. Passengers should use 13th Street MFL and Walnut-Locust BSL stations in the event 15th and City Hall Stations are closed. Train announcements will be made and SEPTA personnel will be on-hand to direct passengers to the parade route. Passengers for Trolley Routes 10, 11, 13, 34 and 36 should look for service announcements regarding possible station closures.

SEPTA reminds all regular passengers that the commute, especially on the Paoli/Thorndale Line and NHSL, could be extremely heavy. SEPTA urges those using its trains, buses and trolleys for the parade to purchase their tickets and passes in advance. Details on all SEPTA fare options are available at www.septa.org/fares/.

SEPTA employee ambassadors wearing red jackets will be available at Center City and Villanova-area stations to assist travelers before and after the parade. For complete service updates and detours, as well as schedules, station maps and fare information, visit www.septa.org, call 215-580-7800, or follow SEPTA on Twitter at @SEPTA and @SEPTA_Social.

The owner and staff showed him how to make their pound cake and other baked goods!

Side part versus middle part: Hair stylist explains which hair style is best for your face shape

Here's the latest debate on the internet: "Millennials" and "Gen Z" are going at it on TikTok for their style.

Among those styles that "Gen Z" says are "out" are skinny jeans and parting your hair on the side.

The university said the male student is no longer on campus as officials investigate.

Side part versus middle part: Hair stylist explains which hair style is best for your face shape