Some of the victims of Wednesday morning’s car crash on Packer Avenue had ties to the mummers.

Around 1:45 Wednesday morning, police say that a 2014 white Audi sedan and a 2015 Acura RDX were headed in opposite directions on Packer Avenue.

Investigators say the driver of the Audi, 29-year-old Keith Campbell, crossed the median and struck the Acura head-on.

Four people were inside of the Acura at the time.

Police say he had multiple stab wounds and they even found a bloody knife in his car. Investigators think Campbell may have stabbed himself. Police say he is expected to survive.

Campbell is facing several charges, including four counts of an accident involving death or bodily injury.

Palandro is the son of the captain of the South Philadelphia String Band. 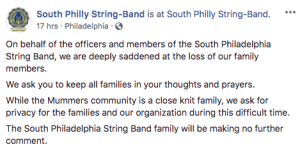 On Facebook, the band released a statement saying they are deeply saddened at the loss of their family members. 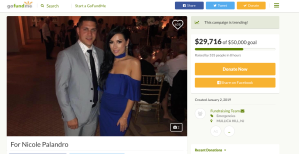 A GoFundMe page has also been set up to help the Palandro family.

LOS ANGELES (AP) — Helen Reddy, who shot to stardom in the 1970s with her rousing feminist anthem “I Am Woman” and recorded a string of other hits, has died. She was 78.

Reddy’s children Traci and Jordan announced that the actor-singer died Tuesday in Los Angeles. “She was a wonderful Mother, Grandmother and a truly formidable woman,” they said in a statement. “Our hearts are broken. But we take comfort in the knowledge that her voice will live on forever.”

1962 - The New York Mets lost their 120th game of the season. It was also the final game in the career of Phillies great Richie Ashburn, who then was on the Mets. The following season, Ashburn began his long run as a Phillies broadcaster.

Sunflowers and other fun activities at Johnson’s Corner Farm

Johnson's Corner Farm in Medford, New Jersey is a popular spot for families during the Fall.

Families can pick sunflowers, pumpkins, and there are other cool activities as well.