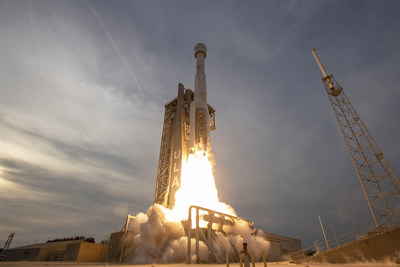 "The integrated NASA, Boeing, and ULA team has worked diligently to ensure the highest level of safety for future astronaut crews," said Gary Wentz, ULA vice president of Government and Commercial Programs. "This launch is a critical step towards future human spaceflight onboard Atlas V and we look forward to the remainder of this mission. Thank you to all of our mission partners for the outstanding teamwork to deliver this spacecraft to orbit."

The Atlas V rocket delivered the Boeing Starliner spacecraft to a 98-nautical mile (nmi) sub-orbital trajectory. Following separation from the Atlas V, the Starliner engines ignited to put the Starliner on its orbital path toward the ISS.

Producing more than one and a half million pounds of thrust at liftoff, the Atlas V configuration was modified specifically for the Starliner spacecraft.

ULA's next launch is the USSF-12 mission for the U.S. Space Force, planned for June 29, from Cape Canaveral Space Force Station, Florida.

Leveraging a legacy of 100 percent mission success launching 150 missions to explore, protect and enhance our world, ULA is the nation's most experienced and reliable launch service provider with world-leading reliability, schedule confidence, and mission optimization. The technologies we launch protect our country and troops in the battlefield, enable search and rescue, aid meteorologists in tracking severe weather, deliver cutting-edge commercial services, and expand our understanding of the Earth. We deliver value unmatched by any launch services company in the industry, a tireless drive to improve, and commitment to the extraordinary.

For more information on ULA, visit the ULA website at www.ulalaunch.com, or call the ULA Launch Hotline at 1-877-ULA-4321 (852-4321). Join the conversation at www.facebook.com/ulalaunch, twitter.com/ulalaunch and instagram.com/ulalaunch.