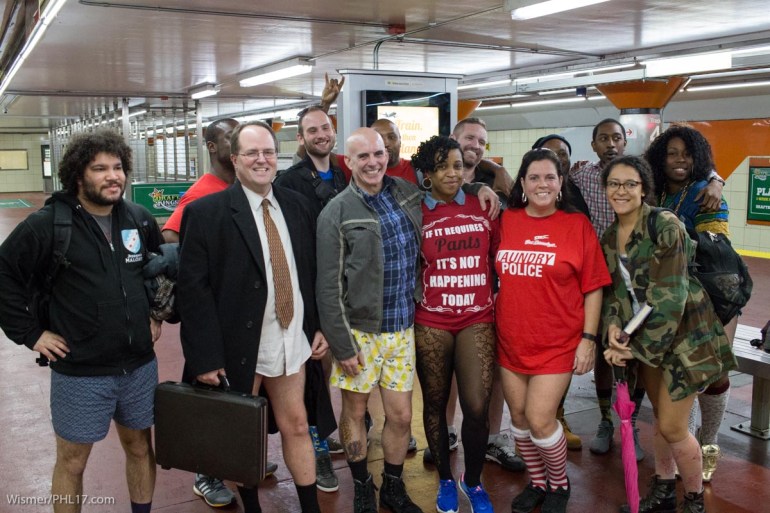 The “No Pants Subway Ride” began in New York in 2002 as the brainchild of Improv Everywhere.  The simple premise of the NPSR is random passengers board the subway in the middle of winter without pants.  The idea is to act as naturally as possible and not tip-off onlookers that you are part of a group. Eventually that idea spread to over 60 cities world wide, including Philadelphia.  The first several years followed that basic model until last year when a local Philadelphia business man, Ray Wall, decided to get his business and his family involved to give the event a purpose.

“It is still a flash mob event all across the globe. That emphasis of it being a flash mob event did not change in Philadelphia. ‘Got Laundry?’ just the felt the need to add some aspects of social awareness to the No Pants Subway Ride global impact,” says Wall.

In the two years since Wall has been involved, the Philadelphia version of the event has turned into a clothes drive for the homeless.  Wall owns local family run company, “Got Laundry?” and uses both company and family resources to make the most of the No Pants Subway Ride.  Every person that donates clothes, especially badly needed socks, gets a “Got Laundry?” t-shirt and of course a smile from the dozen or so family members Ray brings to the event.

The No Pants Subway Ride always has detractors that find it frivolous, even semi-scandalous, but for Wall, he just sees it as a fun way to drop your pants and raise awareness.

“Some of us have forgotten what it feels like to have good old fun. And for those who have less and need more, they are always overlooked. Our purpose in the involvement of the NPSR was to bridge all people’s needs – the need to have fun and be free, the need to donate, the need to give, the need to receive and let’s not forget the need to be happy even if it is only for that moment,” said Wall.

The 2016 Philadelphia event began at Suburban Station and lasted about an hour.  It’s always a crazy photo-op and here are some of our favorite photos from the day.

No Pants Subway Ride has changed over the years, here is our PHL17 Photo Archive from the event.